This two level house consist of a lower level car porch fitted with a ramp and staircase. The upper level rests the main house. The 2 storey section is inspired by the client’s request for a barn look with its façade made up of a modular grey concrete blocks. 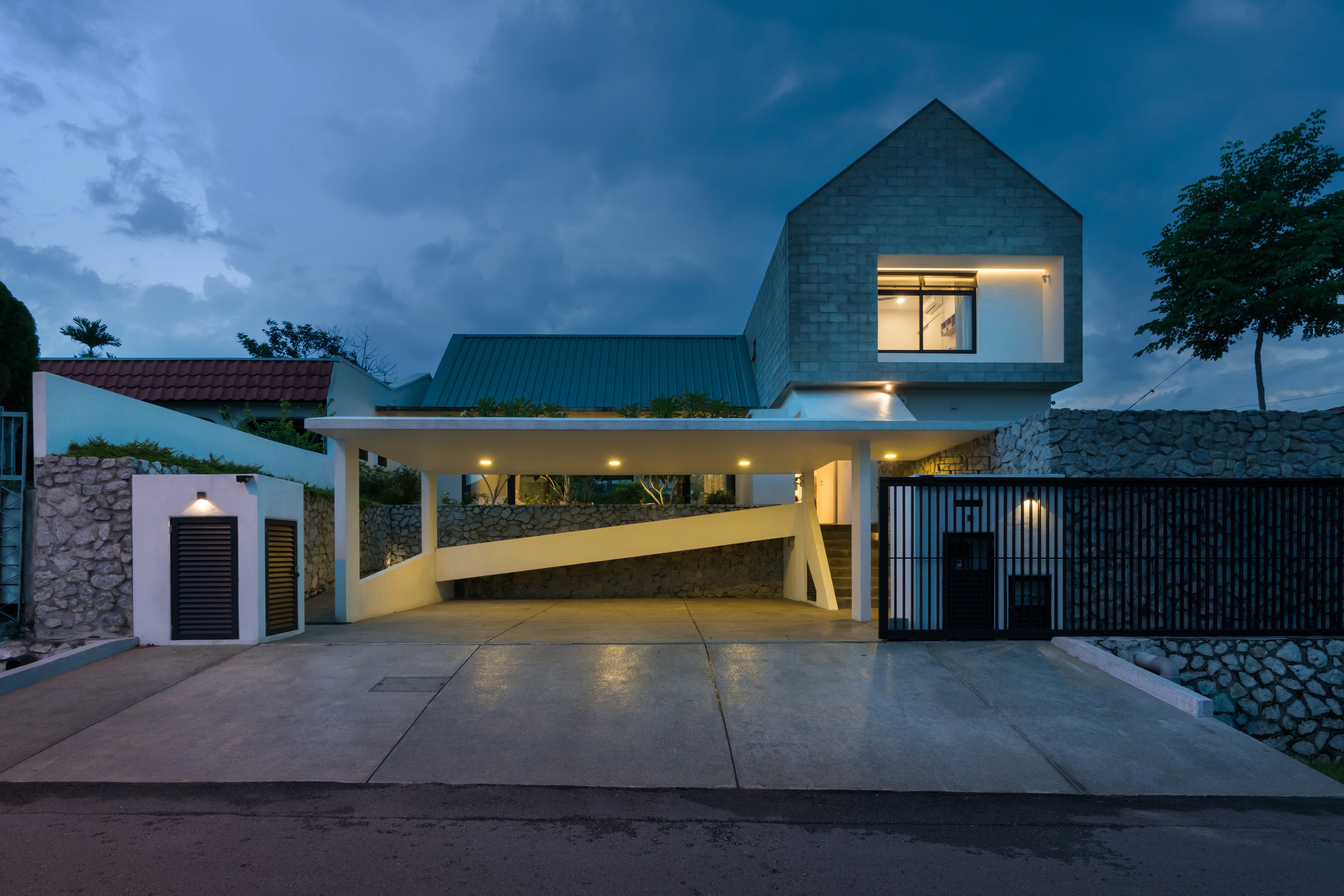 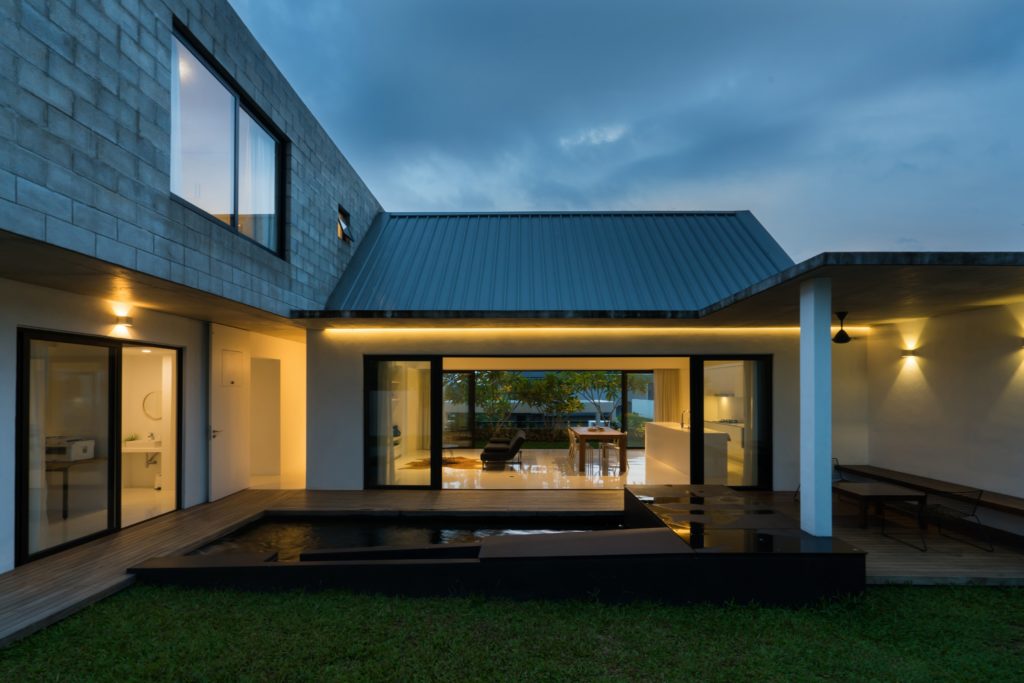 The design is simple and straight forward, keeping you from getting lost in dead ends or walking into unintended areas. 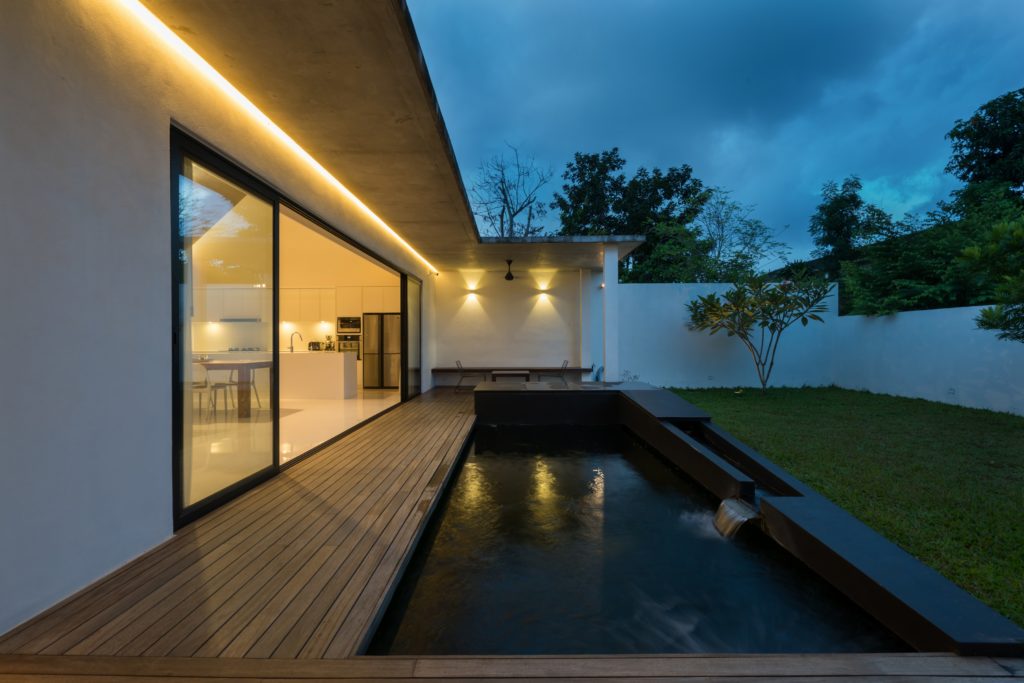 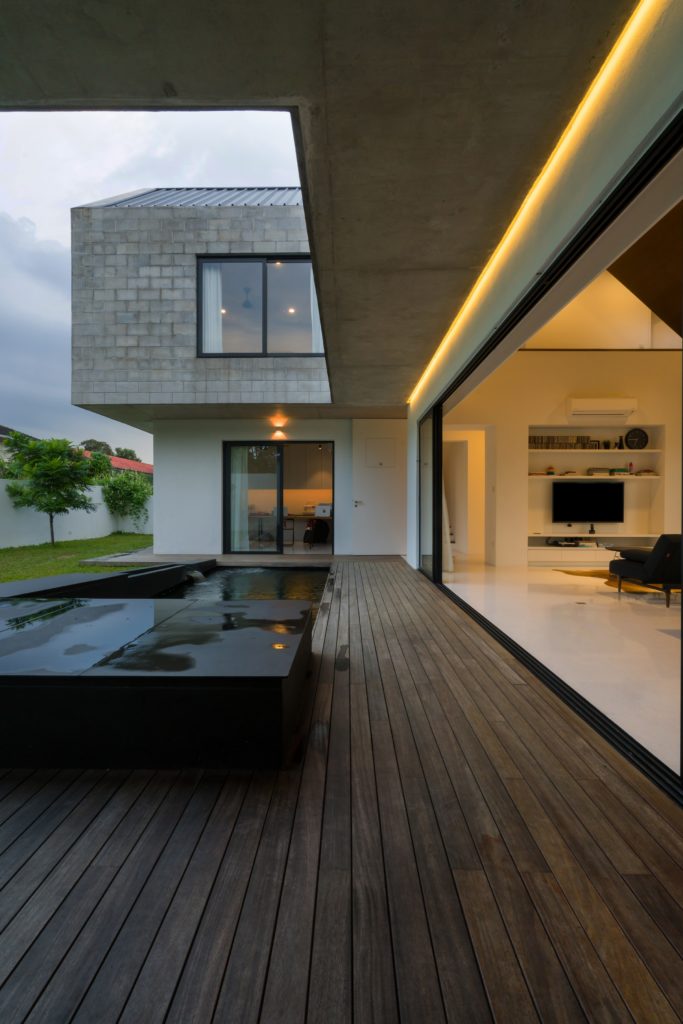 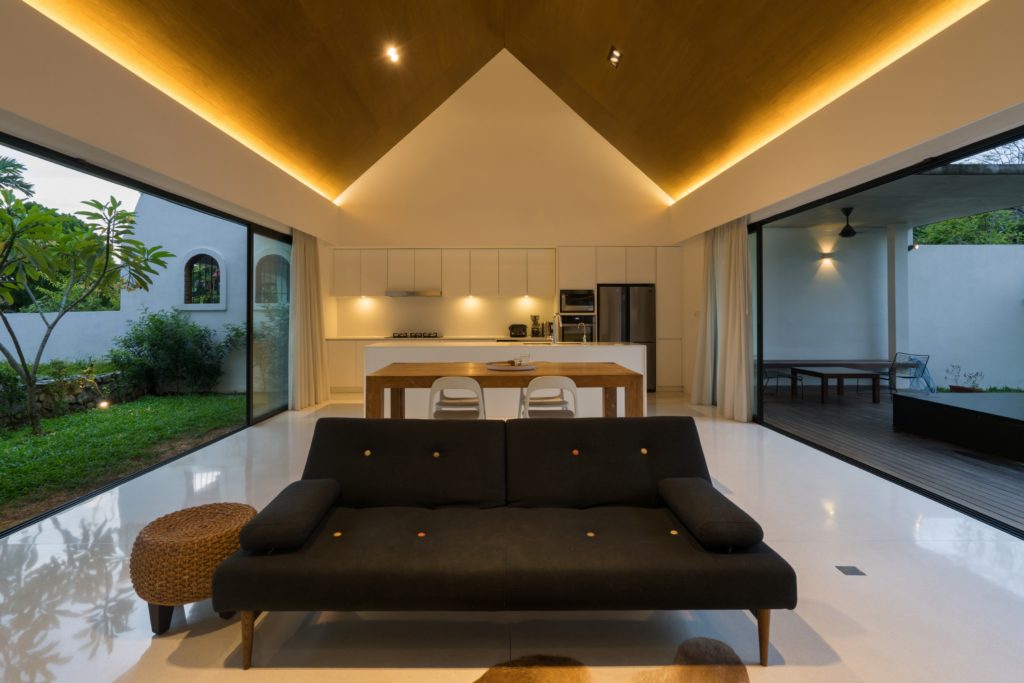 The option to open itself up on both sides creates voluminous spaces, prefect for relaxing in the evenings and having dinner parties. 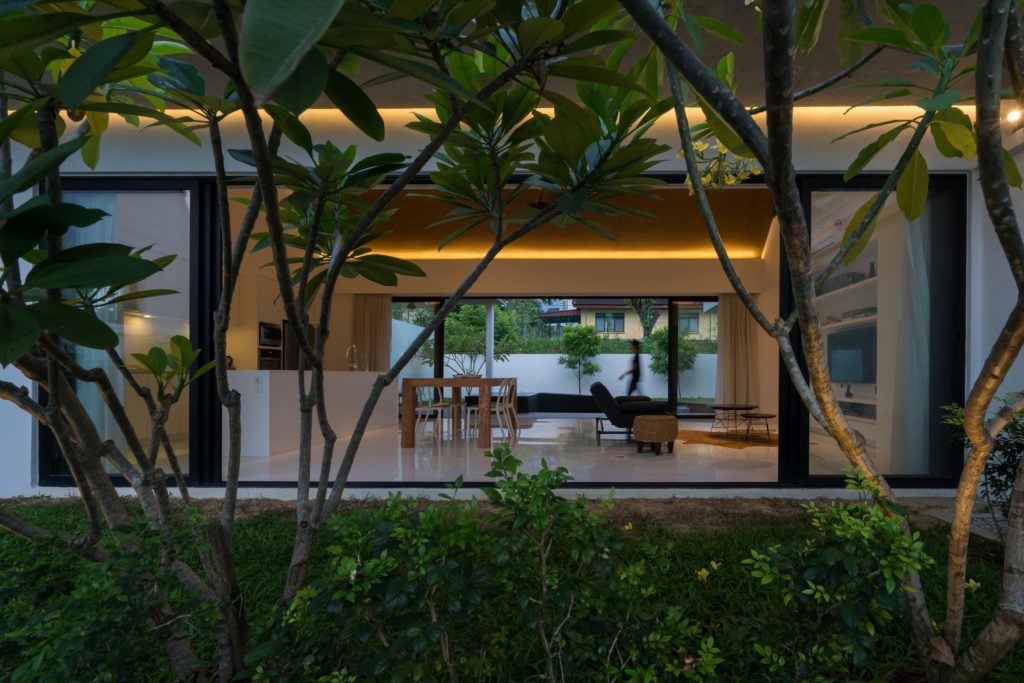 The front garden area that shields the open area from being viewed from the main road.

Albeit a simple terrace house in a new housing development, The Courtyard House was shortlisted for the World Festival of Interiors Awards under the residential category. This double volume faux courtyard complemented with the indoor tree garden has a natural and minimalistic feel to it. This is truly one of the most creative designs of creating open spaces while utilizing the limited space available. 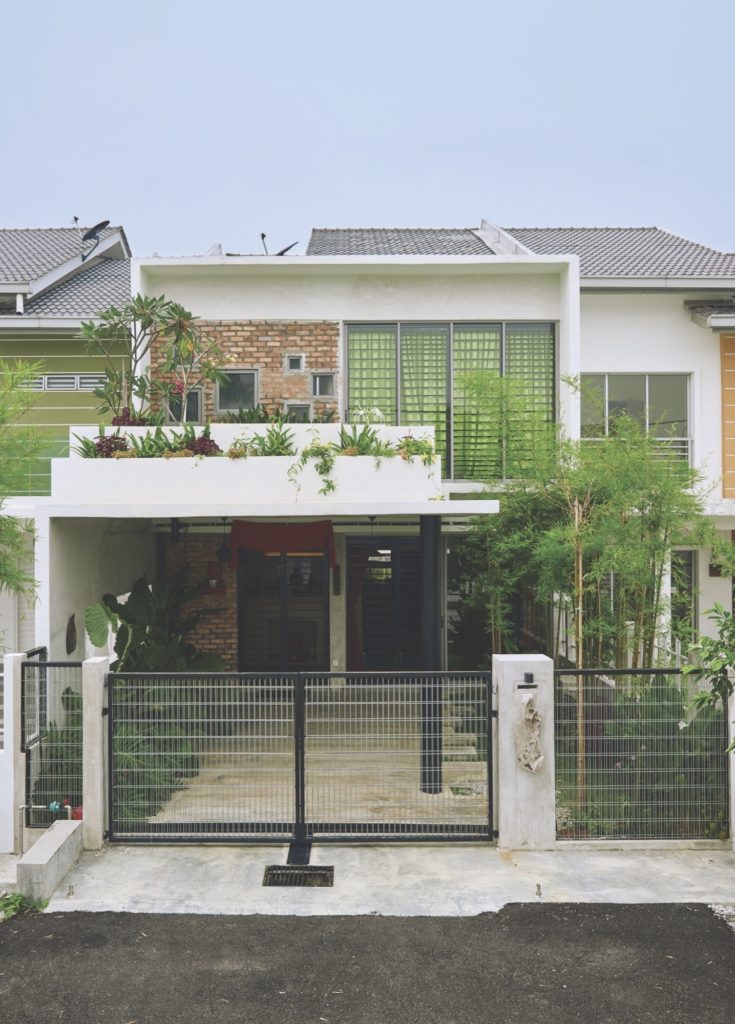 A humble Zen look from the outside that doesn’t try to outdo the rest of the neighborhood. A variety of lush greenery fills the driveway, creating a natural look while  the plants on the second floor prevent the second floor from appearing too plain. 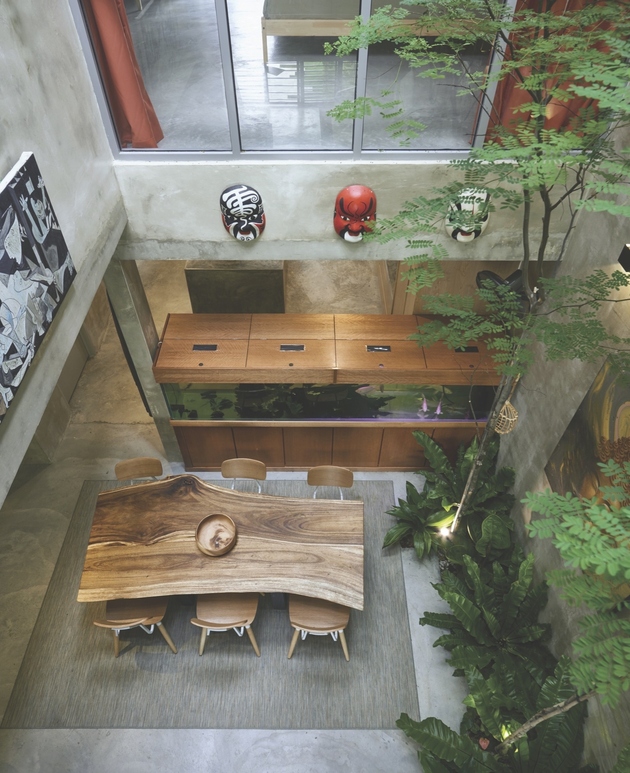 A balanced usage of wood helps to complement the grey concrete walls, painting an outdoor atmosphere throughout  the open courtyard area. 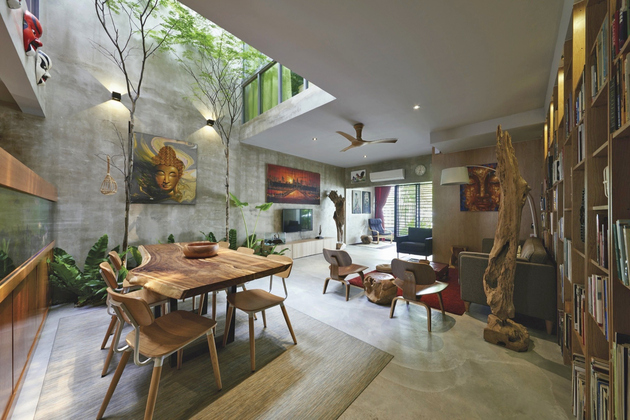 Removing a portion of the upper floor creates a balcony effect allowing ample space that reaches to the very top. Clear polycarbonate roof tiles are fitted to replace some of the clay roof tiles, allowing the right amount of sunlight through without over insulating the house. 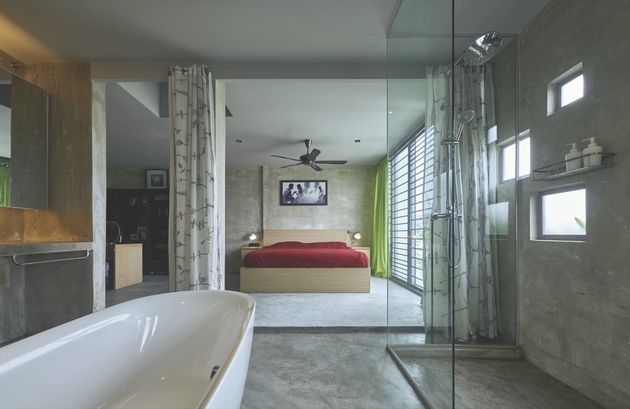 The second floor has 2 bedrooms with an ensuite with the master bedroom’s ensuite separated by a glass door fitted with a curtain. 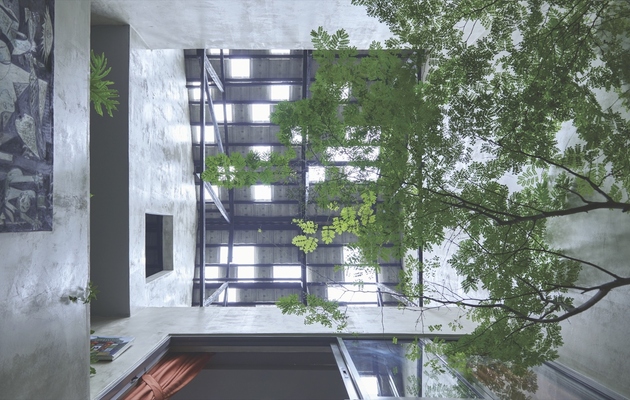 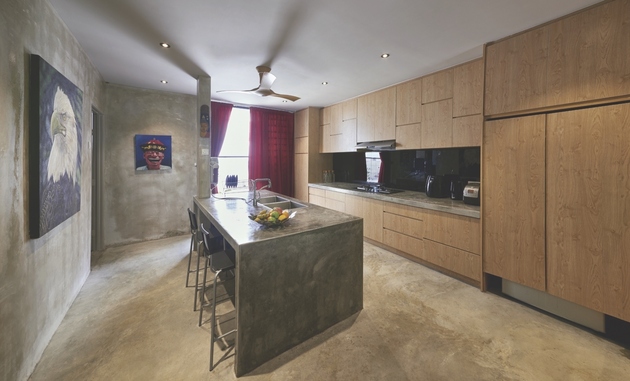 How many terrace houses out there that can rock an inner court yard?

Despite a limited budget given by their client, the house was renovated into a small and compact but spatially efficient one. Originally a common 2 and a half story intermediate link house, it was built up to 4 stories inclusive of the half basement and master bedroom attic. The compact centre courtyard is covered by a green wall, expressing a contemporary and future proof design that will always stay trendy.

Sustainable use of natural resources. The design features includes piping infrastructures that harvest rainwater which can be stored and used for washing cars, plants and flushing the toilets. Limited budget constraints have resulted in a water catchment area which has been predestinated for future storage tanks upgrades. 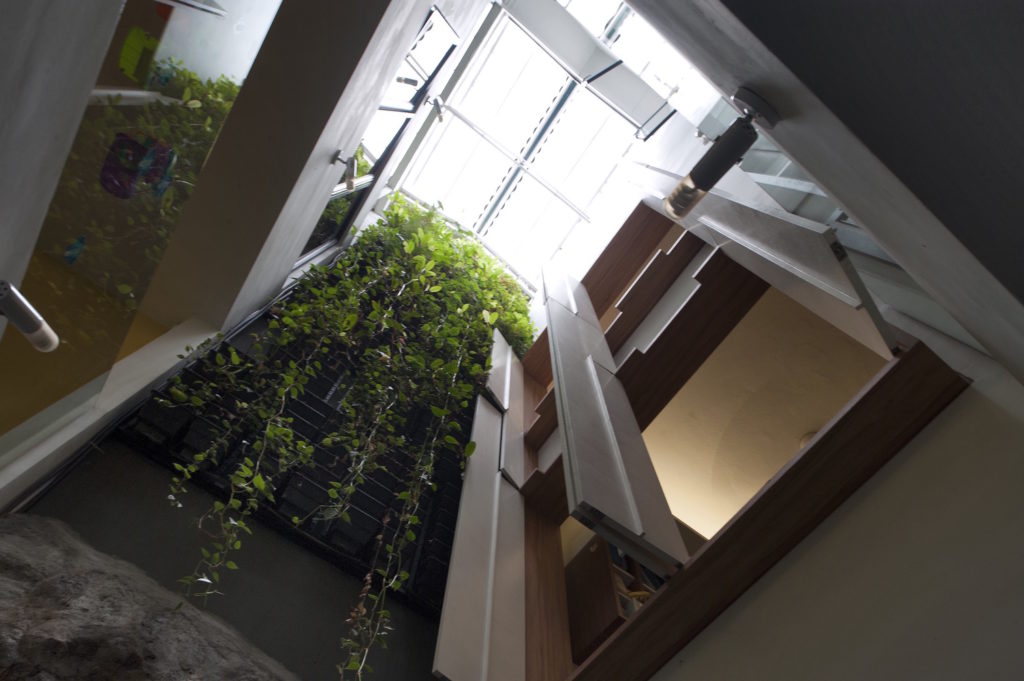 The indoor courtyard that functions as a light well, giving ample natural light that reaches to most parts of the house and the needed photosynthesis to sustain the growth of the green wall. This gives an ample space feel with the perception of a larger space than it really is. The light well enables ease of communication and easy link to different areas of the house.

From what used to be a dilapidated and run-down house for many years, to achieving the highest level Platinum rating of Malaysia’s green building Index, it is certainly an architectural design for a coffee talk. 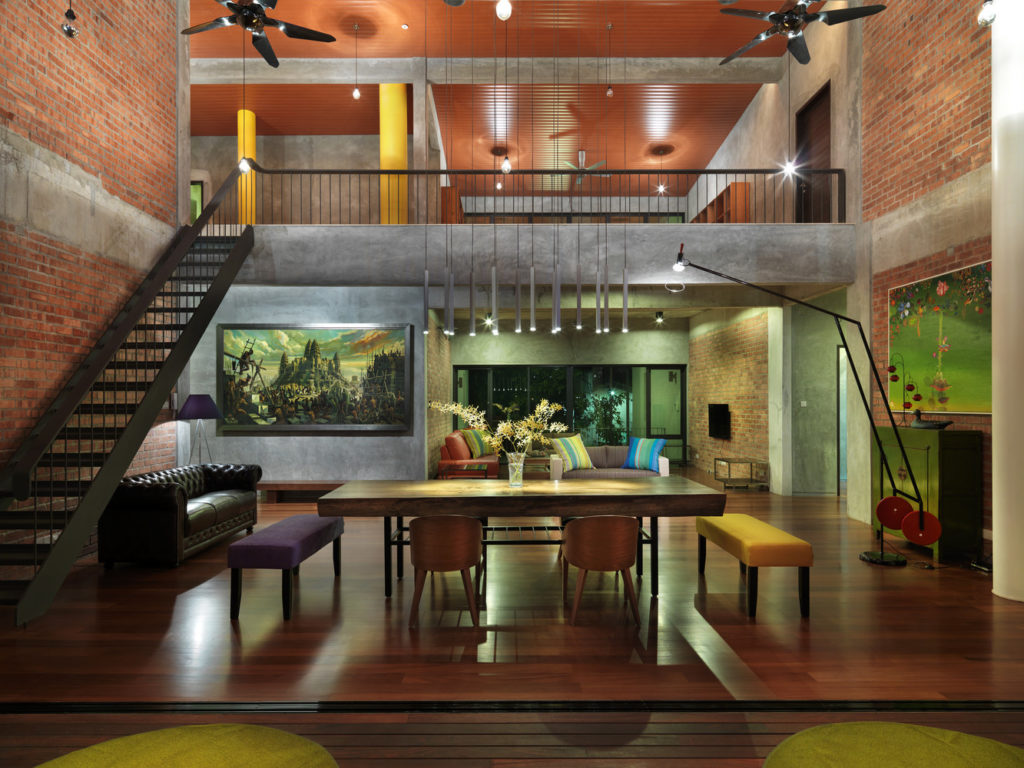 Behind the stunning look of the designs, much efforts were used in the conservation process to reuse as much building materials as possible and leaving much of the existing greenery untouched. All five trees that have matured over the years have been retained with the new designed built to incorporate them. 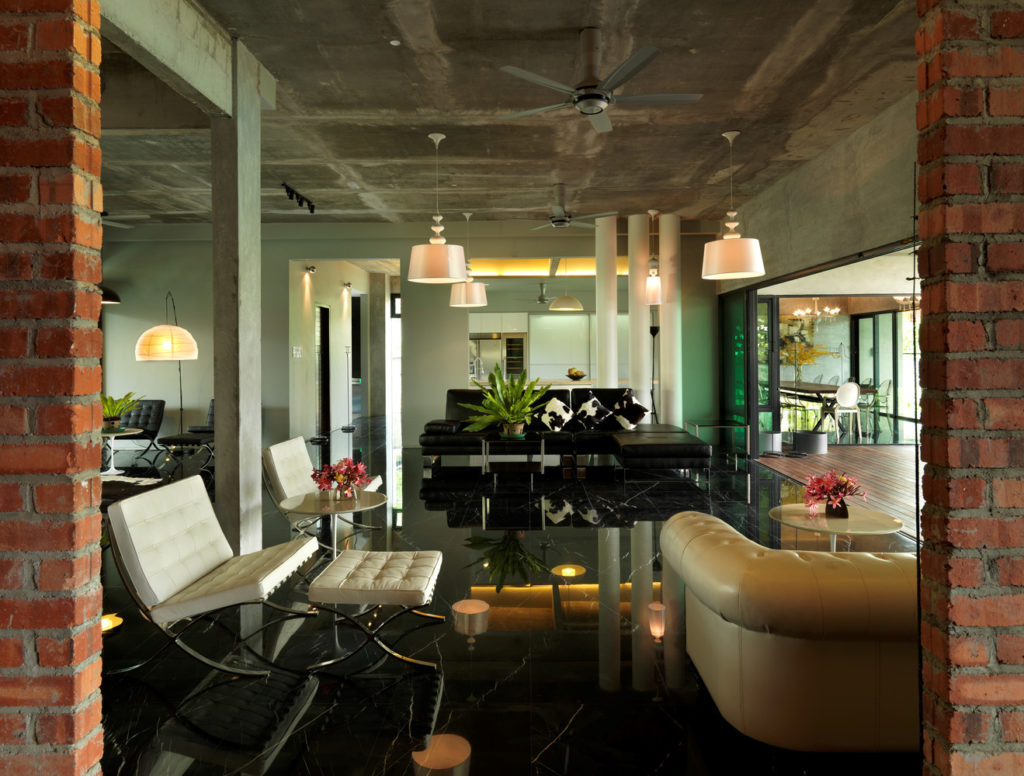 Old concrete roof tiles were crushed as gravel fill, old clay bricks were reused as feature walls and roofing tinbers were used for formwork. Old steel were sold off and concrete and cement aprons were re-used for backfilling aggregate. 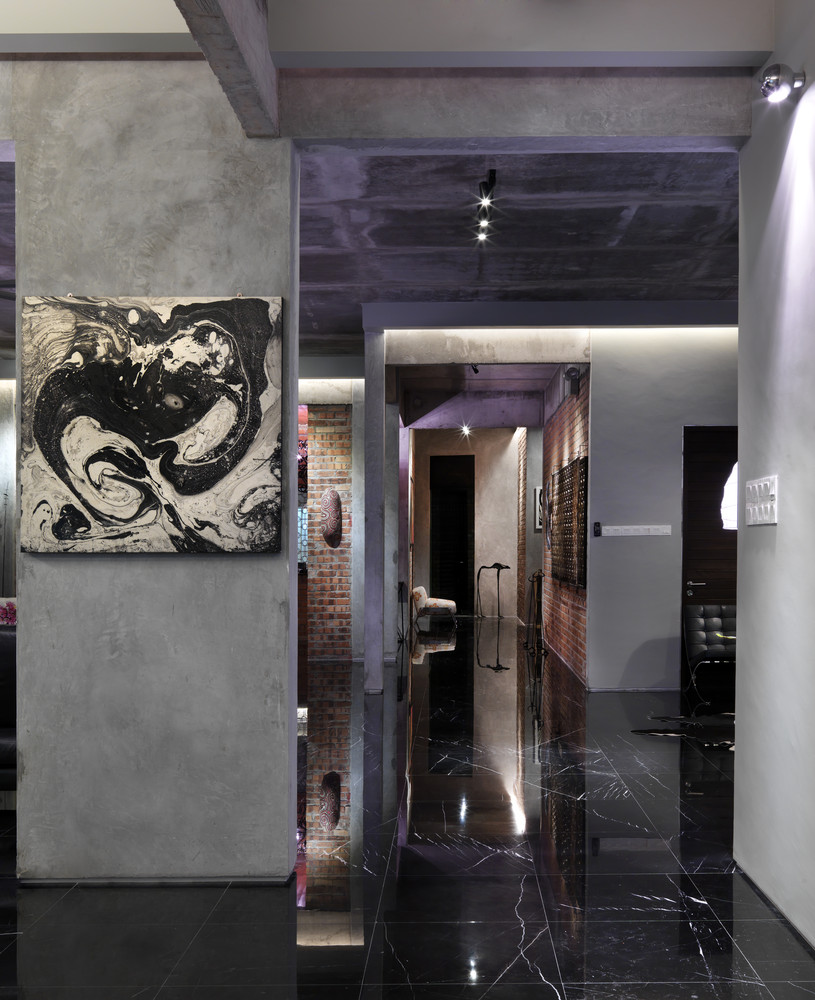 Despite its large size, it only takes up a carbon footprint of a small home through features such as the 5 KW photovoltaic array mounted on the roof which sends back excess energy to the national electric grid. 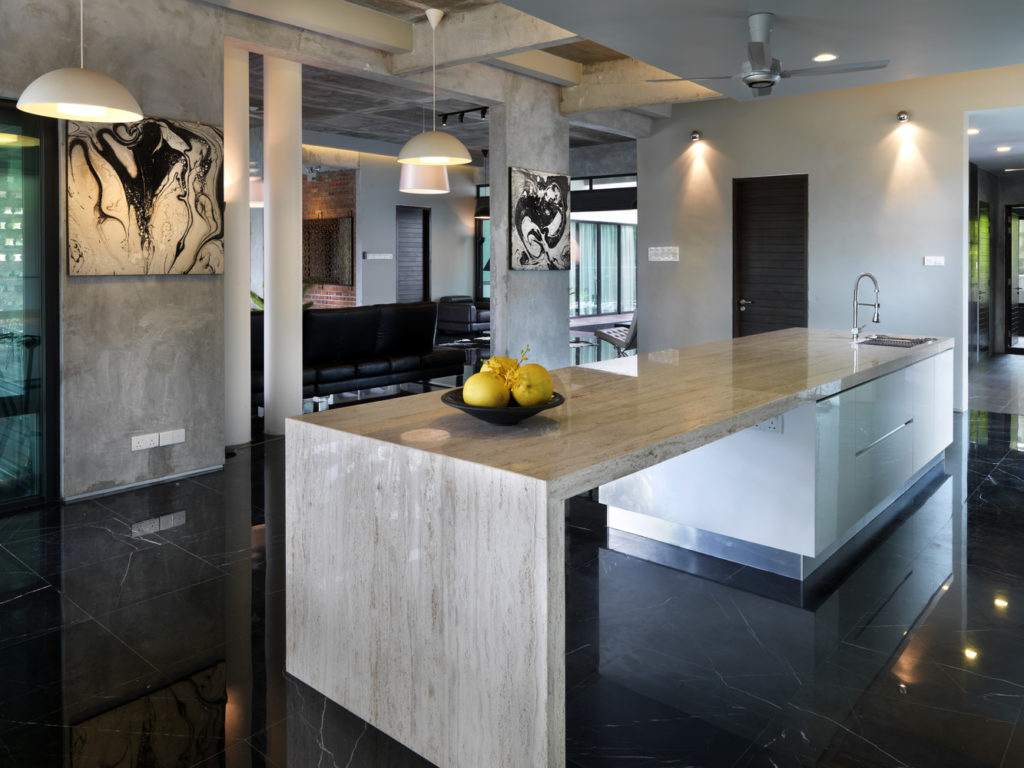 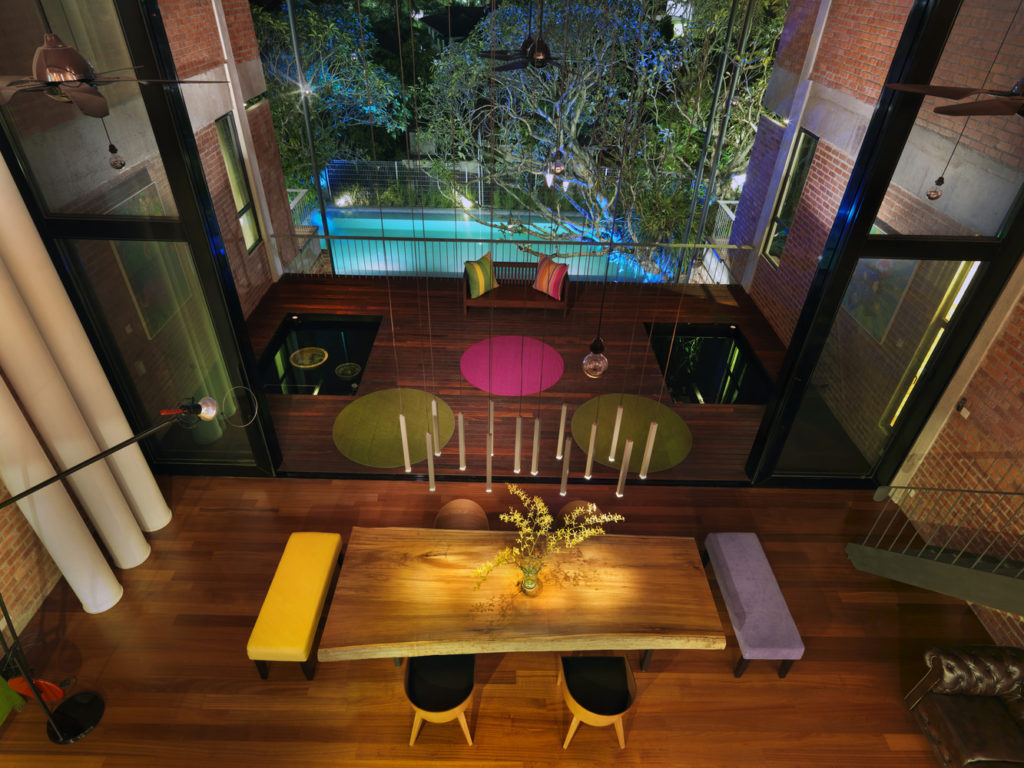 Rainwater is collected from the roof to rainwater harvesting tanks through a series that filters out sediments and eventually the water used for toilet flushing, gardening and car washing. To further add eco friendliness to the design, all tap and sanitary fittings have water saving and reduction valves.

To add more ecological effects, a series of wind turbines combined with glazed pyramids create a stack effect ventilation due to temperature differentials. This helps to insulate and cool the building well without much resources. 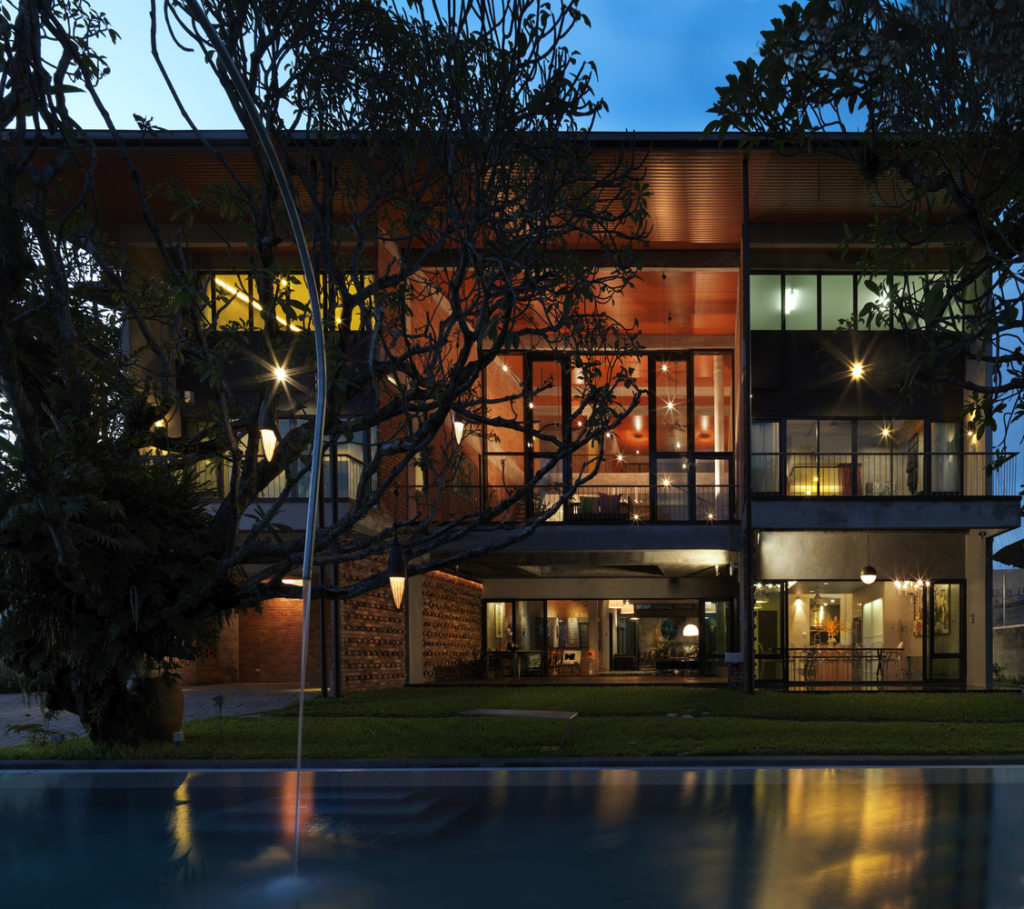 This project was awarded the Residential award winner for Futurc Green Leadership in 2012, and won multiple awards by PAM Awards in 2011.

A stark example of reusing old building materials to create a contemporary look while incorporating it into the new building. In addition to the creative design, it has an added function of optimizing the right amount of sunlight and controlling the airflow naturally. 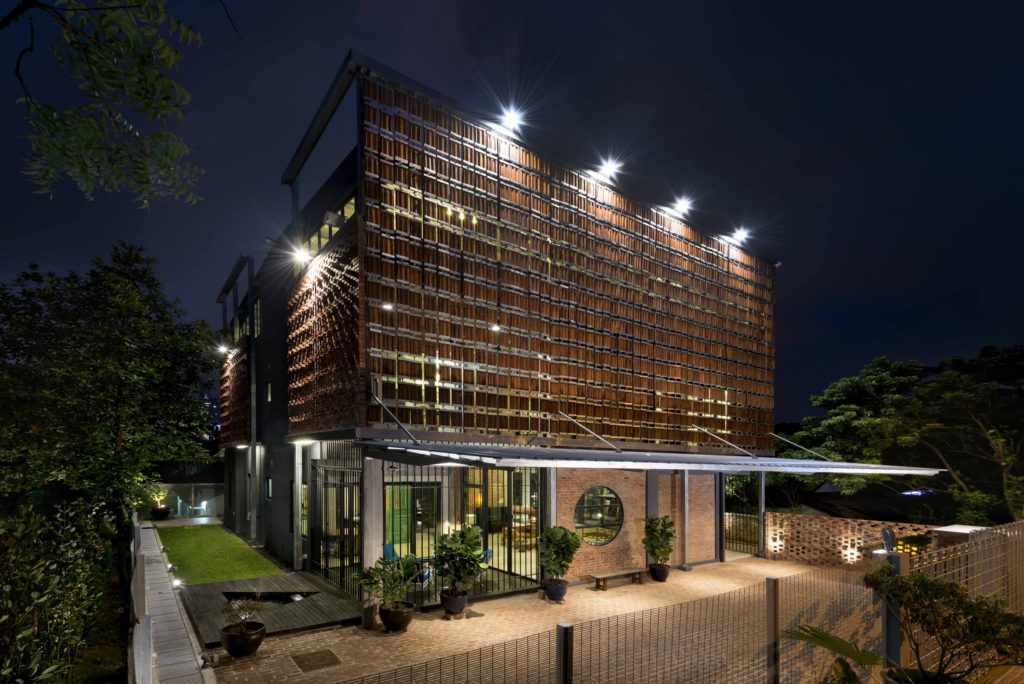 Once an old house with dilapidated house, now a modern state of the art architecture with a touch of classic into it. 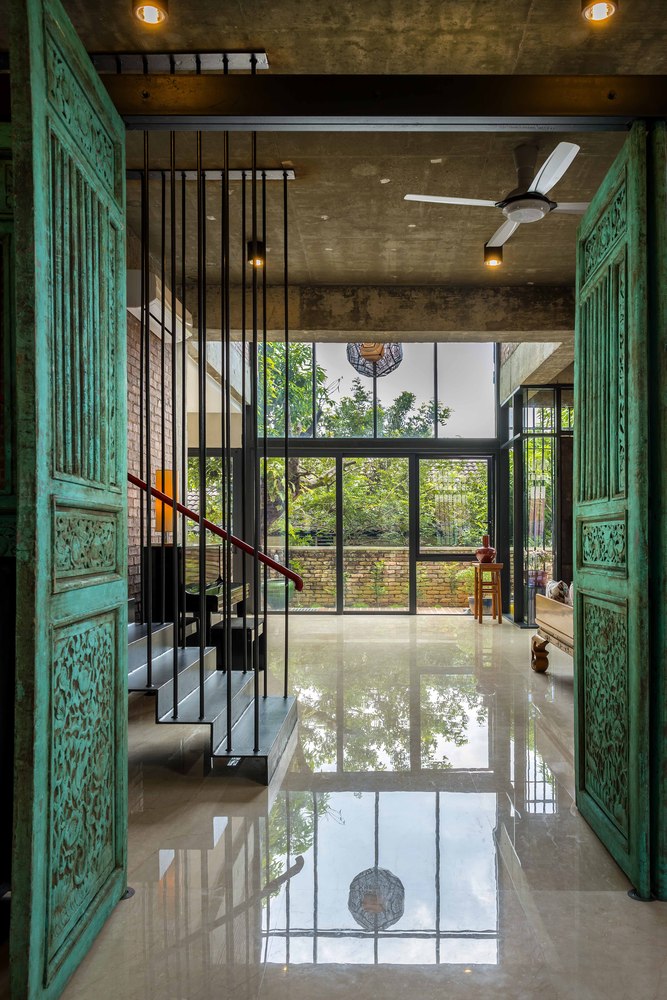 Using the simplest building materials from raw concrete, bricks and wooden flooring, simplicity in design at its finest. 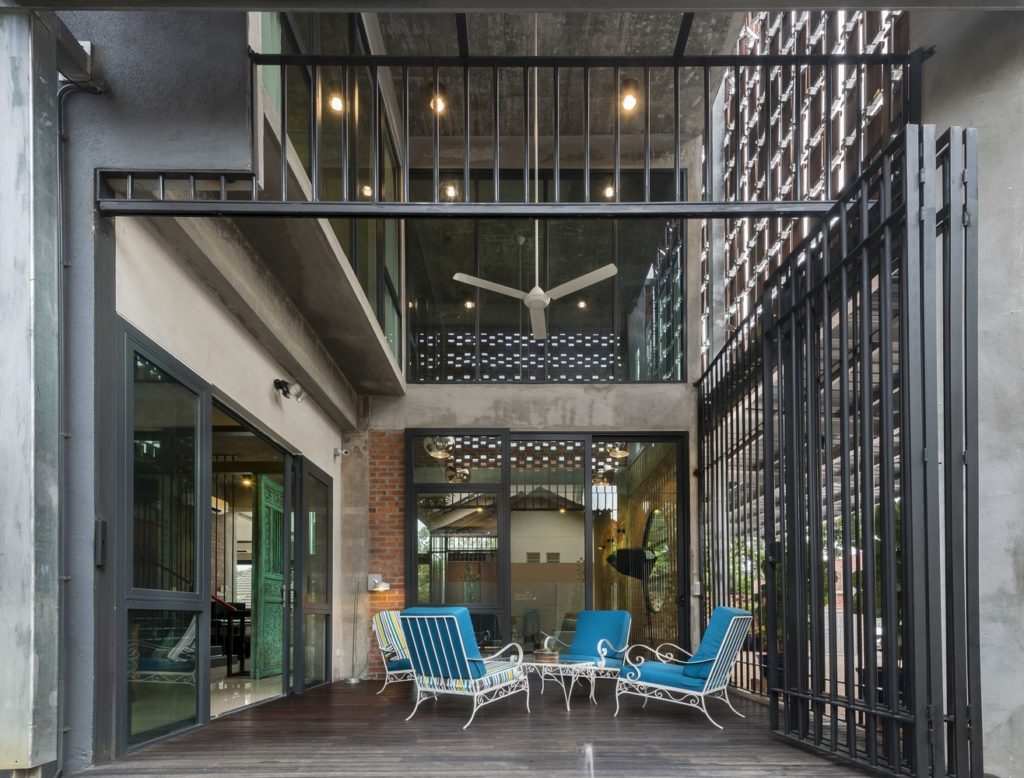 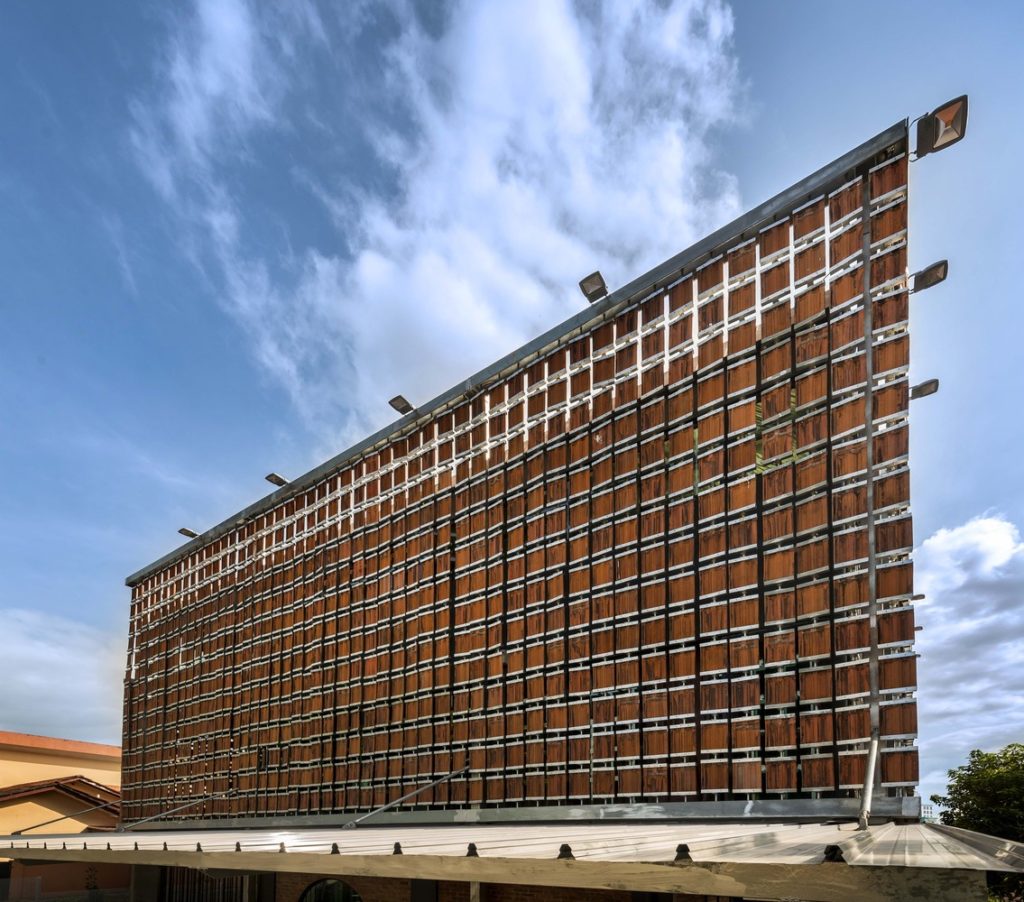 These terracotta Indian roof tiles from the old house are placed on vertical rods, creating a striking screen of swiveling clay, allowing free rotation in response to the wind direction and speed. This leaves the house sufficiently ventilated while the clay tiles act to keep the heat out. 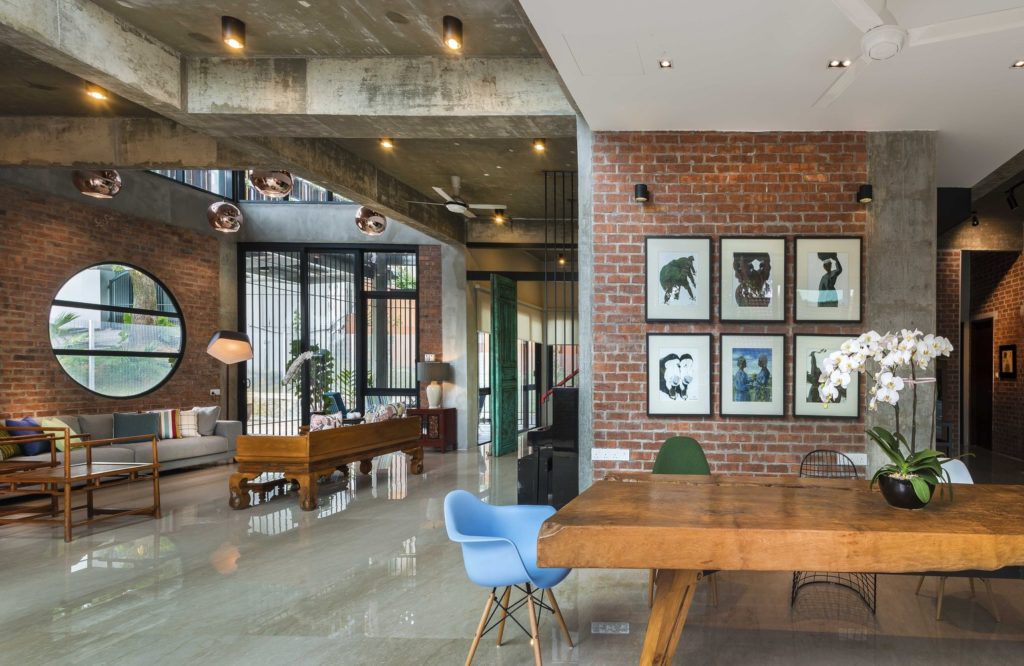 With a clever solution to green buildings and lower build up costs, its no surprise that the Clay Roof House was commended in the PAM Awards of 2017.

With Malaysians becoming more aware on the importance of conservation and sustainability, more and more of our actions and perceptions start reflecting on our design choices. In the future, we will more likely see more and more green designs that will turn heads as they pass though the alleys of greenery.